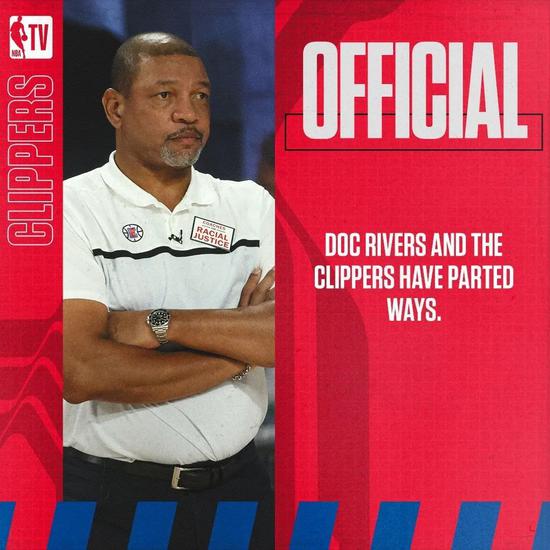 Beijing time on September 29, the Clippers officially announced that head coach Doug Rivers will leave the team and will no longer be the team coach! Rivers had two years left on his original contract. After he left, the Clippers wanted to find a better head coach. It was not that simple.

Lao Li also tweeted and confirmed the news: "Thank you for the Clippers. I once wanted to make this a successful basketball project, a home for free agents, and bring a championship to the Clippers. It's a pity that I can't witness them all come true."

All the previous news indicated that Rivers will stay in office, and his departure is beyond everyone's expectations. However, Lao Li is the champion coach anyway, and he is also very popular in the free market. The Pelicans and the 76ers have already contacted Rivers for the position of coach.

After all, Lao Li's coaching career has achieved remarkable results. According to the statistics of reporter Justin Kubatko, Rivers has won a total of 943 regular-season victories in his coaching career, ranking 11th in history, and won 91 playoff games, ranking 7th in history. In the past 15 seasons, his regular season win rate was 58.1%, and his playoff win rate was 50.6%.

After losing this year's semifinals, the Clippers have not made the conference finals for 50 consecutive years. At the same time, this is the third time in his career that Lao Li's 3-1 lead has been reversed. It is worth mentioning that he is the only coach in history who has been reversed 3-1 many times.

In the first round of the 2003 playoffs, Lao Li coached the Magic led by McGrady. They were in a 3-1 lead and were eventually eliminated by the Pistons 4-3. Another time it became even more famous. In the 2015 Western Conference semifinals, the Clippers were eliminated by the red team in 3 consecutive games with a 3-1 lead! The hair band gang also took this opportunity to become famous.

Several reporters revealed that the main candidates for the Clippers are Van Gundy Jr. and Tylen Lue. Reporter Ohm Youngmisuk pointed out that Director Lu is in the team and has a working relationship with Card and George; Van Gundy has friendship with Clippers President Lawrence Frank. After all, for Ballmer, price is not a problem.

But Guidance Lu is very popular. He let out the words that he is seeking a job as a head coach with an annual salary of $7 million. In addition to the Clippers, the 76ers, the Red Team and the Pelicans are also interested in Coach Lu and will arrange interviews in the near future. The fastest is the 76ers, and their interview will be held tomorrow or the day after tomorrow.

Although he failed this season, this is only Cacho’s first year in the Clippers. No one can say what will happen next. I can only wish them good luck.